Student Pens Must-Read Letter to The New Government About Abortion 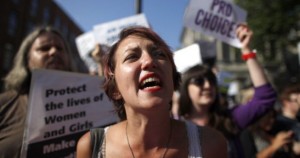 As ridiculous as it is, I have money put aside in case I need an abortion.

Last week a new poll by Amnesty International revealed that 63% of the Irish population support abortion reform.
The poll, part of which was run in the final days of the general election campaign, found that the overwhelming majority of people in Ireland want access to abortion expanded (87%) and abortion decriminalised (72%).
Despite the overwhelming support from the Irish public, Fine Gael have remained pretty much silent on the issue. Enda Kenny believes the issue is too sensitive for a referendum but are willing to set up a forum similar to the Constitutional Convention to consider the matter.
Here, student Rachel O’Neill pens an honest and heartfelt letter to the new government about the need for social reform.

Dear new Government,
The voice behind the Repeal the 8th campaign has been rising steadily over the last few years and it has been brought to the fore recently with women such as Roisin Ingle, Tara Flynn and even more recently Susan Cahill sharing their stories about their abortions. It seemed to me that the tide was turning and with parties like Labour promising to hold a referendum on repealing the 8th amendment, I thought maybe I’ll get to vote on my reproductive rights. I was wrong.
The real losers of this general election are women. The decimation of the Labour party has put abortion on the back burner yet again. How many times are we going to let this key issue be pushed back? Fine Gael promised to hold a citizens convention if they were elected but that was based on the premise that they would go back into government as the majority party. The fact that this is won’t happen now makes me worry about what happens next for the 8th amendment.
Abortion has always been an invisible issue for us. We pretend it isn’t there. We pretend not to notice the 12 women a day leaving our shores to go to England and the Netherlands to have an abortion. We pretend not to notice the clear abandonment of these women by our government and health system. We pretend not to notice that abortion is a tangible, real thing in this country. We have some the strictest laws regarding abortion in the world and yet we’re still talking about it because it’s still there. As much as politicians want us to think it’s an “invisible issue”, it isn’t.
Read full article: www.her.ie

This entry was posted on Tuesday, March 8th, 2016 at 2:25 pm and is filed under politics. You can follow any responses to this entry through the RSS 2.0 feed. Responses are currently closed