If shame has gone, why do we use secret abortions in England to preserve the myth of holy Ireland?

Opinion: In an Irish Times article in 1964, Michael Viney referred to ‘the secret-service mother-and-baby homes’ run by religious orders in Ireland. 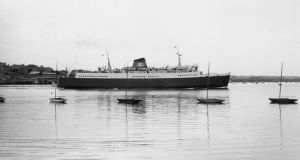 ‘Most “fallen” women knew well enough that they were expected to create a narrative of disappearance, usually one that involved the boat to Holyhead.’ Photograph: HJ Allen/Evening Standard/Getty Images

The Irish psychosis whose latest expression is thousands of dead babies in unmarked graves is a compound of four elements: superiority, shame, cruelty and exclusion. The Taoiseach last week called the deaths of those children “yet another element of our country’s past”. Are we so sure that these forces are not also our country’s present?
The superiority complex in Irish society came from the desperate need of an insecure middle class to have someone to look down on, an inferior Other against which to define its own respectability.
In 1943, the Joint Committee of Women’s Societies and Social Workers compiled a well-meaning memorandum on children in institutions. It noted of those in mother-and-baby homes that “These illegitimate children start with a handicap. Owing to the circumstances of their birth, their heredity, the state of mind of the mother before birth, their liability to hereditary disease and mental weakness, we do not get, and we should not expect to get, the large percentage of healthy vigorous babies we get in normal circumstances. This was noticeable in the institutions we visited.”
These were humane and compassionate reformers. And it seemed obvious to them that children born out of wedlock would be physically and mentally weak and that “we should not expect” them to be normally healthy.

Sense of inferiority
A Catholic priest writing in the Irish Ecclesiastical Record in 1922 under the pen-name Sagart, actually objected to the establishment of mother-and-baby homes, not on the grounds that they were horribly oppressive in principle, but that they might let unmarried mothers lose their proper sense of inferiority.

This entry was posted on Wednesday, June 11th, 2014 at 3:44 pm and is filed under politics. You can follow any responses to this entry through the RSS 2.0 feed. Responses are currently closed