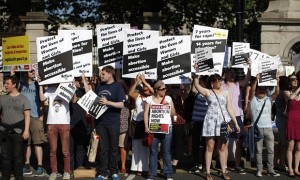 Pro-choice supporters hold placards in front of the gates of the Irish parliament during a demonstration against anti-abortion laws. Photograph: Peter Muhly/AFP/Getty Images

Two-thirds of Irish people want abortion decriminalised, according to a survey that signals a major shift in views on a woman’s right to choose in a country that still outlaws most terminations.

Eight out of 10 people polled for Amnesty International favoured some liberalisation of the law, and 65% said abortion should be decriminalised.
Two years ago, Ireland’s parliament, the Dáil, passed legislation allowing for abortion in extremely limited cases of medical emergencies or when there is risk of suicide if pregnancy goes to full term. Under the law, doctors and medical professionals have the right ultimately to determine if a woman’s life is at risk in these circumstances.
Abortion remains unavailable, for instance, to Irish women who are raped or whose pregnancies are doomed as a result of foetal abnormalities.

The findings of the poll, based on 1,000 telephone interviews in May, demonstrate a widespread lack of knowledge about the legal risk of carrying out abortions in Ireland.
Sixty-four per cent of those surveyed did not know that it is a crime to get an abortion in Ireland when a woman’s life is not at risk. Only 9% knew that having an unlawful abortion can lead to up to 14 years in jail.

Seventy-one per cent agreed that classifying abortion as a crime “contributes to the distress and stigma felt by women who have had abortions” and 45% supported a woman’s right to choose for non-medical reasons.
Read full article: www.theguardian.com

This entry was posted on Wednesday, July 8th, 2015 at 9:43 pm and is filed under politics. You can follow any responses to this entry through the RSS 2.0 feed. Responses are currently closed