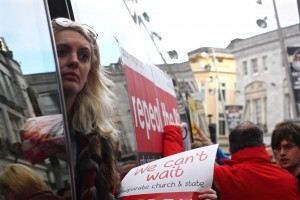 A pro-choice campaigner looks out from the “abortion pill bus.” (Photo by Sally Hayden/VICE News)

Sarah was just two weeks pregnant when she discovered an illegal abortion bus was coming to town.
“I have a four year old girl, I have a mortgage, it’s a new relationship, it’s not a good time,” the 31-year-old told VICE News, adding that she had been using contraception. “I just started a degree course, I work, I can’t afford a baby right now.”
Sarah — who asked that we change her name — lives in Limerick, a small, riverside city on the southwest of Ireland, a country where abortions are almost always illegal. She was making arrangements to travel to the UK to obtain a termination when she found out about a direct action, organized by a group called called ROSA (short for Reproductive rights, against Oppression, Sexism, and Austerity), which might be able to help her.

VICE News spent two days this week traveling around Ireland with this group of activists and one member of parliament who had decided to wilfully break the law and risk up to 14 years in prison by distributing the World Health Organization-approved medical abortion pills mifepristone and misoprostol to women.
Their whistle-stop tour of the country finished on Saturday, but participants told VICE News on Monday that they have still had no contact from the police, something they say proves authorities are unwilling to prosecute people under the anti-abortion law because they welcome “escape valves.”
Despite protests and media attention, a significant number of women came to the bus to ask for help, and VICE News can confirm that at least one — Sarah — procured pills for imminent use, while others will be given them over the next few days.

This entry was posted on Wednesday, October 28th, 2015 at 3:16 pm and is filed under politics. You can follow any responses to this entry through the RSS 2.0 feed. Responses are currently closed