Hundreds of Irish women travel to Netherlands for abortions

Suitcases signifying the Irish women who travel abroad to access abortion services, outside the Department of the Taoiseach. File photograph: Nick Bradshaw 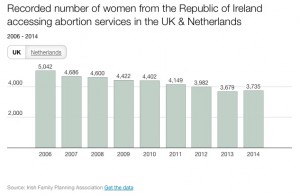 Figures for 2014 and this year were not available.
Irish crisis pregnancy counselling services have been offering information on Dutch and British abortion clinics since 2005.
Dutch clinics have a reputation for providing a sensitive service and being cheaper than some clinics in Britain.
However, the number of women giving Irish addresses in Dutch clinics has declined sharply in recent years.
While 461 women are recorded as travelling from Ireland to have an abortion in the Netherlands in 2006, this had fallen to 12 in 2013.
The numbers fell to 351 in 2008, to 134 in 2009 and to 31 in 2010.
Some 34,602 women and girls gave Irish addresses at abortion clinics in England and Wales over the past nine years, according to data from the UK Office of National Statistics.
The numbers registering Irish addresses there fell consistently in these years, from 5,042 in 2006 to 3,679 in 2013.
However, the numbers rose last year, when 3,735 women gave Irish addresses in Britain.
Read full article: www.irishtimes.com

This entry was posted on Wednesday, September 23rd, 2015 at 9:36 pm and is filed under politics. You can follow any responses to this entry through the RSS 2.0 feed. Responses are currently closed