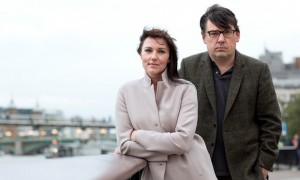 Helen and Graham Linehan opted for an abortion in London after discovering the foetus would not survive after birth. Photograph: Teri Pengilley/for the Guardian

When Helen Linehan found out in 2004 that there was something fatally wrong with the 11-week-old foetus she was carrying, she was advised to have an immediate termination, because doctors knew there was no chance that the baby would survive longer than an hour after birth.
The foetus had a condition known as acrania, which meant that its skull had not closed over the brain. Although it probably would have survived inside the womb, it would not have lived once it was born, and doctors were clear that termination was the only option. Accompanied by her husband, Graham – writer of the television comedy series Father Ted, Black Books and The IT Crowd – she had an abortion three days later in a hospital near their home in London. “It was terribly sad and devastating, but it was handled well,” she said.
Some months later, they moved back to Ireland, where they discovered that, had they been living there during this first pregnancy, Helen would have been forced to carry the pregnancy to term, or face a 14-year prison sentence for procuring an illegal abortion.
The shock of that revelation has prompted the couple to speak out about their experience for the first time, as part of a campaign by Amnesty International calling for decriminalisation of abortion in Ireland. The fact that abortion is illegal in Ireland, even in cases where there is no chance for the foetus to survive, makes Ireland “a dangerous place to be pregnant”, said Graham. “I don’t think it is safe for women in Ireland to be pregnant. Abortion is an important medical procedure and when that’s taken off the table, then you’re not safe. A place without abortion puts two lives in danger, not one,” he said.
“In Ireland, Helen would be a criminal to have undergone the termination. She would have had to carry the child knowing it would die in great pain shortly after she had given birth to it,” he said. “I have always been very proud to be Irish but I am embarrassed by Ireland’s abortion laws. This is just something you can’t be proud of. It’s barbaric.”
Read full article: www.theguardian.com

Ireland doesn’t have to be bound to the past. It needs to repeal the Eighth Amendment of its constitution, and the other laws that chain women to the past and deny them their rights.
Sign our petition to the Irish government at ‪www.amnesty.org.uk/ireland‬
Watch also this video by amnesty ireland:

This entry was posted on Monday, October 19th, 2015 at 7:33 pm and is filed under politics. You can follow any responses to this entry through the RSS 2.0 feed. Responses are currently closed