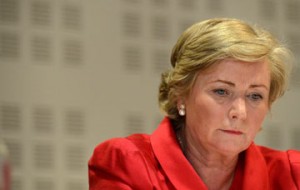 It is important to see what the expert group on abortion recommends before the Government decides what action to take, Minister for Children Frances Fitzgerald said today.

Ms Fitzgerald was reacting to remarks made yesterday by Minister of State for Health Kathleen Lynch that she did not think the Government had a choice but to legislate on abortion.

The recommendations of the expert group “would cover a wide variety of actions, let’s wait and see what the expert group say,” Ms Fitzgerald told reporters at the launch of the Irish Childhood Bereavement Network in Dublin this morning.
She said the expert group would report in October.

Tánaiste Eamon Gilmore yesterday played down a potentially serious Coalition rift on abortion when an expert group on the issue reports.

The Labour Party leader acknowledged it was “a sensitive issue” but said “we have to wait until we see the report of that expert group before we can draw any conclusions”.

He refused to be drawn on whether the Government would legislate for abortion if it was recommended. “I don’t want to speculate about what it is going to recommend,” he said.The 14-member expert group, established in January and chaired by Mr Justice Seán Ryan, will make recommendations based on the 2010 European Court of Human Rights judgment that the State failed to implement existing rights to lawful abortion where a mother’s life is at risk.

The issue is already a contentious one within Fine Gael, with Minister for Health James Reilly facing strong opposition to any liberalisation of the law from 15 TDs and Senators. Dr Reilly has agreed to consult party colleagues before bringing the expert group’s recommendations to Cabinet.

This entry was posted on Wednesday, July 25th, 2012 at 2:26 pm and is filed under politics. You can follow any responses to this entry through the RSS 2.0 feed. Responses are currently closed