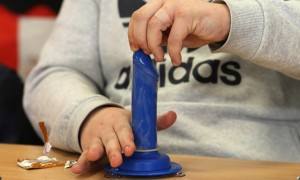 A young man learns how to put on a condom at a Brook sex education class in Coleraine, Northern Ireland. Photograph: Paul McErlane for the Guardian

‘If a church school doesn’t believe in contraception, they won’t teach it.’ Family planning experts warn that ‘moralistic’ approach to some teenagers’ sex education is leaving vulnerable young people unable to make informed choices
Six teenage boys dressed in tracksuits are sitting in a classroom in a training centre in Coleraine, Northern Ireland. Lined up in front of them are bottles of Vimto and Mountain Dew energy drinks – and a number of colourful plastic penises.

The boys, aged 17 and 18 and on a construction course, are having a condom relay as part of a sex education session. It’s a boisterous lesson – the boys crack non-stop jokes and laugh uproariously at each other’s quips. “This is the best class ever,” says one boy, gasping for air between gales of laughter.
They play a game called “Who’s the Daddy?” where they all receive the results of a pregnancy test sealed in an envelope and are asked to consider what they would do in the event of a positive result. They are appropriately solemn as they peel open the envelope.

“I’d try my best to explain it to my mum, then I’d run out of the house crying,” says one. Others coo over the idea of having their own baby. Not one of them would consider having an abortion. “That’s sick, because … that’s a child,” says one, and they all agree. They know it’s not legal in Northern Ireland, and not one of them is in favour of legalising it.

The young men in Coleraine are fortunate. Thanks to the sexual health charity Brook, which provides community-based sex education for young people in the province, they have had three half-day sessions to talk openly and honestly about every aspect of relationships and sex – including abortion – which is highly controversial in this part of the UK.
During this particular session, they have handed around 15 different types of contraception, discussing the pros and cons of each; they have squirmed in front of graphic pictures of every sexually transmitted infection (STI) known to humankind, as well as having considered the consequences of an unplanned pregnancy.

This entry was posted on Saturday, January 9th, 2016 at 7:44 pm and is filed under politics. You can follow any responses to this entry through the RSS 2.0 feed. Responses are currently closed