Abortion in Ireland: The Injustice and Day-to-Day Terror Faced by Countless Women 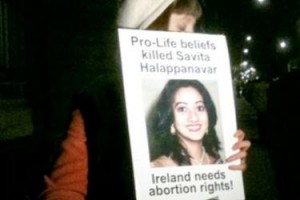 Abortion Support Network’s Jennifer Reiter at a vigil in London

As an organisation that hears first-hand from the women who bear the burden of Ireland’s archaic abortion laws, the tragic death of Savita Halappanavar was shocking and sickening.

And yet not as surprising as you’d think.
Given that abortion laws in Ireland are among the strictest in the world, a tragedy of this kind wasn’t so much a matter of if, but when. The circumstances in which Savita died are truly abhorrent. Admitted to hospital experiencing a miscarriage at 17 weeks, despite being told that the fetus “wasn’t viable” she was made to suffer for days, left begging for an abortion that she was refused as long as there was a foetal heart beat.

Haunted by the harrowing details of Savita’s death we’re left to wonder how many more women in Ireland may have lost their lives as a result of being denied a life-saving abortion.
Read more: www.rhrealitycheck.org

This entry was posted on Friday, November 30th, 2012 at 2:42 pm and is filed under politics. You can follow any responses to this entry through the RSS 2.0 feed. Responses are currently closed