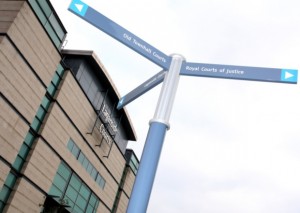 More than 200 abortion activists have issued an extraordinary challenge to the justice system by declaring that they have broken the criminal law on assisting an abortion in Northern Ireland.
The 215 named individuals, the overwhelming number of whom are women, said they were “inviting prosecution” about would begin to hand themselves in at police stations in response to an exceptionally rare court case which began last week in Belfast.

On Friday, a woman in her 30s went on trial at Belfast’s Magistrates’ Court on two charges of unlawfully procuring drugs used to end a pregnancy.
She cannot be named for legal reasons, in order to protect her daughter’s identity.
The court was told that the alleged offences of procuring a poison or other noxious substance knowing that ti was to be used with the intention of securing a miscarriage occurred in 2013.
The court was told by a prosecution lawyer said the case involved the alleged injured party’s mother. The judge confirmed that the defendant was being returned for trial at Belfast Crown Court.

Now a group of activists have used the case to issue a challenge which has the potential to decide whether widespread access to abortion is, at least in a de facto sense, legal in Northern Ireland.

Each of the individuals who have signed the open letter released to the media have admitted a criminal offence which in Northern Ireland carries a sentence of up to five years.
Read full article: www.newsletter.co.uk

This entry was posted on Thursday, June 25th, 2015 at 12:20 pm and is filed under politics. You can follow any responses to this entry through the RSS 2.0 feed. Responses are currently closed