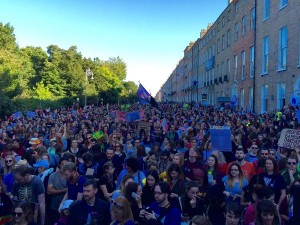 Thousands of protesters took to the streets of Dublin today in a demonstration against the country’s restrictive abortion law, which criminalizes terminations — even in cases involving rape, incest, or fatal fetal abnormality.

The “March for Choice” followed a route through the city center of the Irish capital, and saw many women and men pulling suitcases behind them, a gesture meant to symbolize the estimated 10 to 12 women who travel to the UK each day for abortions.

The marchers called for the repeal of the Irish Constitution’s eighth amendment — introduced in 1983 — which says that an unborn child’s right to life is equal to that of its mother.
In recent weeks, high-profile Irish women, including Irish Times columnist Roisin Ingle and comedian Tara Flynn, have gone public about their abortions, provoking debate across the country and ensuring that the issue will remain a heated topic of discussion in the run up to next year’s general election.

“Having a baby that first time would not have been best for me,” Ingle wrote. “I have not had one scrap of regret or shame about what I did.”
Read full article: news.vice.com

This entry was posted on Monday, September 28th, 2015 at 8:49 pm and is filed under politics. You can follow any responses to this entry through the RSS 2.0 feed. Responses are currently closed