A culture of fear, isolation and guilt is enshrined in law. The old political order should be thoroughly ashamed 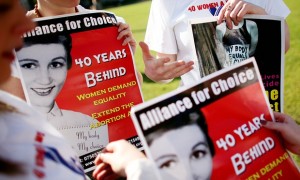 An Alliance for Choice abortion rally in Parliament Square, London, in 2008. ‘Such is the macho, sectarian politics of Northern Ireland that the province remains saddled with Victorian law.’ Photograph: Graeme Robertson for the Guardian

To grasp the real meaning of the law on abortion in Northern Ireland, put out of mind the finger-jabbing abstractions of the Protestant politicians and the Catholic priests, and instead listen to the voices of the women who have lived with the practical consequences. This week they have been sharing their stories through the Guardian: tales of racking up debts to fund clinic fees in England, of lonely flights taken without the partner who should have been there to hold a hand, tales of seeking advice from doctors too fearful of prison to say anything useful, of sourcing illicit pills on the internet and fervently hoping that you’ve read the instructions right, and of the need to get your story straight before making a judgment about whether the bleeding has got to the point where A&E cannot be avoided.

Such terrible things are happening within the UK of 2016. One lesson is the sheer futility of presuming to second-guess the ethical and practical judgments that women make about their own wombs. However much a moralising lawmaker may wish to force a woman to carry on with a pregnancy she does not want, whatever obstacles he may put in the way of her taking control, he will often fail. When an unwanted pregnancy can warp a whole future, neither the travel costs nor the dangers of self-administered treatment will be a decisive deterrent, any more than the occasional horrors of the backstreet abortion prevented them happening back in Britain’s own Vera Drake days. The rest of the UK woke up to this reality half a century ago, with the Abortion Act of 1967. But such is the macho, sectarian politics of Northern Ireland that the province remains saddled with Victorian law, and indeed, in certain respects, the last few years have seen the regime of criminalisation become harsher.

This entry was posted on Saturday, January 9th, 2016 at 7:34 pm and is filed under politics. You can follow any responses to this entry through the RSS 2.0 feed. Responses are currently closed