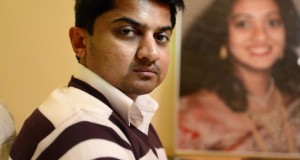 Praveen Halappanavar is dissatisfied with the HSE’s report into the death of his wife, Savita. The report was delivered to his solicitor, Gerard O’Donnell, on Friday. Photograph: Cyril Byrne

Galway hospital staff underemphasised miscarrying woman’s worsening health, HSE draft report finds
The Health Service Executive report on the death last year at Galway University Hospital of Savita Halappanavar has found there was an overemphasis by hospital staff on the welfare of Ms Halappanavar’s unviable foetus and an underemphasis on her deteriorating health.
The final draft report says: “The investigating team considers there was an apparent overemphasis on the need not to intervene until the foetal heart stopped, together with an underemphasis on the need to focus an appropriate attention on monitoring for and managing the risk of infection and sepsis in the mother.”
Praveen Halappanavar, the husband of Savita, is dissatisfied with the report, which was delivered to his solicitor, Gerard O’Donnell, on Friday.
He has instructed Mr O’Donnell and his medical adviser to meet the chairman of the investigating team, Prof Sir Sabaratnam Arulkumaran, later this week to submit their observations.

Key issues
Last night Mr O’Donnell outlined to The Irish Times the key issues arising from the report. It finds that on admission to the Galway University Hospital on Sunday, October 21st, Ms Halappanavar’s white blood-cell count was elevated, which indicated her body was fighting an infection.
Read full article: www.irishtimes.com
Read more about this case: www.irishtimes.com

This entry was posted on Wednesday, April 3rd, 2013 at 4:21 pm and is filed under politics. You can follow any responses to this entry through the RSS 2.0 feed. Responses are currently closed