Basil McCrea spoke of young couples having to abort their terminally ill foetuses in England and bring home their remains in a suitcase. 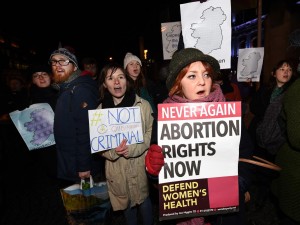 This week, Protestant and Catholic politicians came together in a rare move of solidarity across the political divide at Stormont. In Northern Ireland’s divided society, there’s perhaps one thing on which ‘both sides’ can always agree: women do not deserve rights.
A vote was held on whether to amend the region’s abortion ban, which is currently among the most restrictive in the world. After the Belfast High Court ruled the ban is a breach of human rights legislation back in November, Stormont was given one last opportunity to amend it to allow abortions in the event of rape or incest, as well as a fatal foetal diagnosis which meant survival outside the womb would not be possible.
One politician, Anna Lo, who proposed the amendment in the case of rape or incest, telling her colleagues her experiences of working as an interpreter for the Northern Irish police and coming face-to-face with the distress of vulnerable women immediately after being raped – a distress compounded by fears of being forced to give birth to their rapists’ babies.
Another, Basil McCrea, spoke of young couples devastated to learn that their much -wanted pregnancy involved a defect which meant the foetus could not survive outside the womb, and who were forced to travel to England for an abortion and bring their child’s remains home in a suitcase.
Among Stormont’s otherwise often macho-posturing and aggressive politics, the vote was a rare one of raw emotion.
After hours of debate, on the cusp of midnight, Stormont voted no to both amendments and the abortion ban will remain in all cases.

This entry was posted on Monday, February 15th, 2016 at 2:18 pm and is filed under politics. You can follow any responses to this entry through the RSS 2.0 feed. Responses are currently closed