Mother tells of devastation at DUP’s ‘U-turn’ over abortion

belfasttelegraph.co.uk, 02 May 2015 by Victoria O’Hara 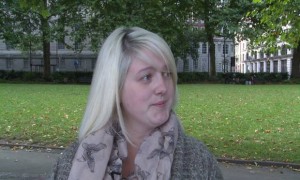 Sarah Ewart had to travel to England for an abortion

Sarah Ewart said she feels let down by the First Minister, adding that male politicians need to stop “taking control over women’s problems”.
Speaking last night Mrs Ewart said that although politicians were sympathetic to women diagnosed with fatal foetal abnormalities, none were sympathetic enough to “put their neck out” and change the law.
She spoke out after Mr Robinson stated that proposed draft guidelines for abortion offered a better way forward than legislation. Mrs Ewart claimed the DUP had previously offered support to change the law.
Justice Minister David Ford said Mr Robinson had done a “U-turn” on his position of having a free vote on the matter in the Assembly.
Mr Robinson has defended his stance on abortion as “completely consistent”.
Mrs Ewart, who had to travel to England in 2013 for a termination after being told her baby had a fatal foetal abnormality, said she and her family had been led to believe they were going to get support on the issue from a number of people in the DUP.
Read full article: www.belfasttelegraph.co.uk

This entry was posted on Saturday, May 2nd, 2015 at 11:54 pm and is filed under politics. You can follow any responses to this entry through the RSS 2.0 feed. Responses are currently closed