The 1967 Abortion Act was never extended to Northern Ireland, and women there still have to make the expensive and difficult journey to England to access this basic right.
newstatesman.com, 30 June, 2015 by June Eric-Udorie 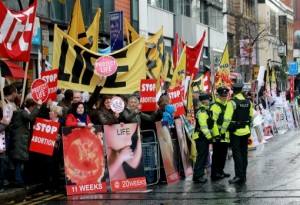 An anti-abortion demonstration in Belfast in 2012. Photo: Peter Muhly/AFP/Getty Images

In Belfast, a mother is being prosecuted for giving her daughter abortion pills to induce a miscarriage, pills which are illegal under abortion laws in Northern Ireland. As a result, over 200 women in Northern Ireland have signed an open letter from the campaign group Alliance for Choice to the Public Prosecution Service asking them to “arrest” them for using or providing illegal abortion pills. Over 200 women who are fed up with their bodily autonomy being toyed with, controlled and owned by male dominated governments.
As a recent Amnesty report put it, the laws in Northern Ireland are “draconian” and women there are being treated like “child-bearing vessels”. Fionnghuala Nic Roibeaird lives in Northern Ireland and signed the Alliance for Choice petition. When I spoke to her, she said: “Whether you want to call us vessels or incubators, that’s how we’re seen in the eyes of the state. The problem is that it’s such a controversial topic that the state don’t want to touch. Everyone knows the pills are coming in. It’s all over the internet. There are Facebook pages regularly sharing information telling women if they need an abortion, where they can get it and if they’re past the mark to go to the Abortion Support Network if they can’t afford to travel.” Access to abortion as Emma Campbell, the Vice-chair of Alliance of Choice said, is very much to do with class: “You can get an abortion if you have money, a credit card and the ability to travel. If not, you don’t really have a choice because abortions are only allowed in limited circumstances.”
Read full article: www.newstatesman.com

This entry was posted on Wednesday, July 1st, 2015 at 1:26 pm and is filed under politics. You can follow any responses to this entry through the RSS 2.0 feed. Responses are currently closed