Irish Woman Live-Tweets Trip to Get Abortion in England 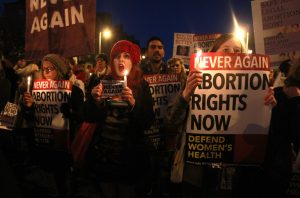 A march for changes in abortion law in Dublin in 2012. Credit Peter Muhly/Agence France-Presse — Getty Images

Two Irish women who live-tweeted a trip to England so that one of them could get an abortion set off a debate over the weekend, highlighting the restrictions placed on the procedure in their home country and renewing pressure on the government to respond to calls for change.
Abortion is banned in Ireland unless a woman faces an immediate risk of death, a high bar that leads thousands to leave the country each year to have the procedure. The woman who live-tweeted her abortion journey from the account @TwoWomenTravel was one of them.
Accompanied by a close friend, she awoke before dawn on Saturday and made her way to Dublin Airport for a 6:30 a.m. flight to Manchester, England.

This entry was posted on Wednesday, August 24th, 2016 at 8:36 pm and is filed under politics. You can follow any responses to this entry through the RSS 2.0 feed. Responses are currently closed