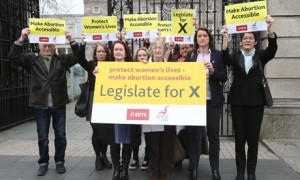 Protestors in Dublin in April. The new bill allowing for strictly limited abortions was prompted by the 1992 X case, involving a 14-year-old who travelled to Britain for an abortion after being raped. Photograph: Julien Behal/PA

Campaigners target cafes, pubs, changing rooms and public toilets with illegal information on abortion access
Pro-choice activists in Ireland are risking up to 14 years in prison with a guerilla-style information campaign designed to help the estimated 11 Irish women per day who travel to Britain for terminations.
They are targeting cafes, pubs, clubs, gym changing rooms and public toilets with thousands of leaflets giving contact details for British abortion clinics as well as the price of terminations. The literature includes a website where Irish women can buy early abortion pills (effective up to nine weeks of pregnancy) online via womenonweb.org.
Organisers and supporters behind the campaign, which began after Savita Halappanavar’s death in Galway University Hospital last autumn, say they intend to intensify their leaflet blitz after the government approved a bill on Tuesday to allow for strictly limited abortions in Ireland.
Disseminating information on how to buy early abortion pills is illegal in the Republic and under the new legislation those helping to procure an illicit termination risk being jailed for up to 14 years.
The abortion information blitz is taking place as Irish politicians in parliament debate whether or not to support the Fine Gael-Labour coalition’s protection of life in pregnancy bill, which the cabinet backed last Tuesday night.
One part of Ireland the pro-choice activists have targeted to distribute highly detailed information on abortion access is Galway, the city where Halappanavar died.
Read full article: www.guardian.co.uk

This entry was posted on Wednesday, June 5th, 2013 at 4:57 pm and is filed under politics. You can follow any responses to this entry through the RSS 2.0 feed. Responses are currently closed