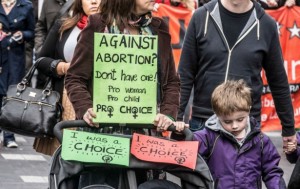 New “exceptions” to the country’s total ban on abortion are worthless in practice.

Last week in Dublin I was part of an event, “Too Loud a Silence: Abortion and Censorship in Irish Media,” organized by an Irish activist group, the Abortion Rights Campaign, at the Teachers’ Club in Parnell Square. The room was packed with women, young and not-so-young, which is something you don’t always see at an American pro-choice event. I read from my no-longer-quite-so-new book, Pro: Reclaiming Abortion Rights, and a splendid panel—social policy researcher Goretti Horgan, journalist Carol Hunt and activist Angela Coraccio—dissected the sorry state of reproductive rights in Ireland now, where abortion is banned except, theoretically, when the woman would die or commit suicide (we have the horrific death of Savita Halappanavar in 2013 to thank for the Protection of Life During Pregnancy Act, which provides that extremely narrow exemption). Penalty for taking an abortion pill like those bought on the Internet by women all over the world? Up to fourteen years in prison.

This entry was posted on Thursday, April 2nd, 2015 at 9:21 pm and is filed under politics. You can follow any responses to this entry through the RSS 2.0 feed. Responses are currently closed