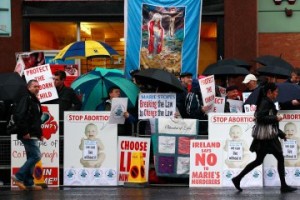 The first clinic offering abortions on the island of Ireland opened its doors in the Northern Irish city of Belfast on Oct. 18, but the 400 pro-life protesters gathered outside were determined that no abortion procedures would happen there that day. Buses full of antiabortion demonstrators stood on the sidewalks carrying banners and placards outside the clinic, which is operated by Marie Stopes International, a U.K.-based organization that works worldwide providing reproductive- and sexual-health care services. “We knew we couldn’t sit back and live in a country where unborn babies were being violently destroyed every day,” says Bernadette Smyth, founder of Precious Life, a Northern Irish pro-life group, speaking after her organization’s participation in the protests. “The question of abortions is not a health issue, it’s a criminal one. Marie Stopes will be carrying out abortions illegally.”
Smyth’s claim is denied by the clinic. “Marie Stopes is operating completely in line with the current legal framework in Northern Ireland,” says a spokeswoman who requested that her name be withheld amid concerns for staff safety. “There’s a real need for a good sexual-health clinic in Northern Ireland. The clinic was able to open as planned, and we were pleased to receive thousands of messages of positive support from women and men telling us to stand tall against the protesters.” The spokeswoman declined to say whether any women have undergone abortions at the clinic.
Read more: world.time.com

This entry was posted on Tuesday, November 13th, 2012 at 10:02 pm and is filed under politics. You can follow any responses to this entry through the RSS 2.0 feed. Responses are currently closed