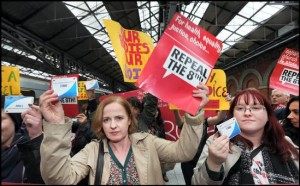 A GROUP of pro-choice campaigners took banned abortion pills after travelling over the Border by train to collect them from the North.

Socialist TD Ruth Coppinger took the “safe, non-surgical abortion pill” during a rally held outside Connolly Station in Dublin yesterday afternoon, after the group of 30 campaigners returned from collecting the abortion pills in Belfast.
They had ordered them online on ‘Women on Web’ and had them delivered to addresses in the North.
A number of women from pro-choice campaigns, including ROSA, Action for Choice and Real Productive Health, also took the abortion pill, which is illegal to purchase here. None of the women who took the pills is currently pregnant.
The Dublin-West representative said their journey to Belfast was an attempt to re-enact the contraceptive train of the 1970s, and they were joined by several other TDs, including the recently elected Paul Murphy, Richard Boyd Barrett and Joe Higgins.
“The main purpose of this event was to highlight the ongoing hypocrisy of the ban on abortion in this country. Because, despite the ban, thousands of women leave the country every year, or go to the North to collect these pills, and that’s not going to stop by banning abortion,” the mother of one said.
“We need to repeal the eighth amendment (to the Constitution) now and it’s absolutely urgent for women’s health and lives.”
Read full article: independent.ie

This entry was posted on Thursday, October 30th, 2014 at 1:12 am and is filed under politics. You can follow any responses to this entry through the RSS 2.0 feed. Responses are currently closed