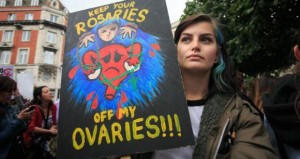 Gardaí at the march estimated that 1,500 to 2,000 people attended while organisers said up to 3,000 people had attended.

Protester Niamh Hanley said “I don’t believe in our political system and I don’t think anything will change unless we stand up and use our voice.” Jennifer Brennan said “I think this young woman has been treated appallingly. I think that we can do alot better for women in this country and for women who come from overseas.” Richard Hamilton said he came out to march because “the current law does not seem to be workable.”
Read full article: www.irishtimes.com

This entry was posted on Friday, August 29th, 2014 at 12:26 am and is filed under politics. You can follow any responses to this entry through the RSS 2.0 feed. Responses are currently closed