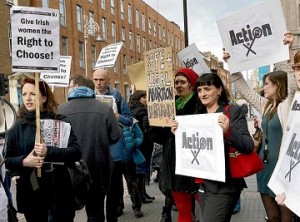 The Government has defeated a Dáil Private Members’ Bill implementing the X case ruling to provide limited access to abortion by 111 votes to 20.
The Private Members’ Bill, put forward by Socialist Party TD Clare Daly, along with People Before Profit TD Joan Collins and Independent TD Mick Wallace, seeks to create a legal framework for abortion in Ireland where a woman’s life is at risk.
The vote was opposed by Fine Gael, Labour and Fianna Fail. It was backed by Sinn Fein and number of independents.
Minister for Health Dr James Reilly rejected the Bill on the grounds that the House should await the report of an expert group on the matter.
Speaking before the vote, Ms Daly said she respected other people’s opinions, but there had some inaccuracies in the debate. The Bill, she said, did not seek abortion on demand. She said it was incredibly limited and solely provided for the situation whereby an abortion would be permissible in Ireland where the life of the woman was at risk, including from suicide.

Following a 1992 Supreme Court ruling – known as the X-case – abortion has been legal in circumstances where there is a substantial risk to the life of the mother. However, successive governments have not enacted legislation to give full effect to the ruling.
Minister of State for Health Roisín Shortall thanked Ms Daly and her colleagues for moving the Bill. She reiterated the Government’s commitment to the “expeditious implementation’’ of the European Court of Human Rights judgement. This found the State had violated the rights of a woman who had cancer and who was forced to travel abroad to get an abortion.
Ms Shortall said she agreed with people who were critical of the fact that the issue had not been addressed. “Many years have been lost in respect of the commitment to legislate for the X case,’” she added.
She said it was unfair to criticise the current Government, given that an expert group had been set up and legislation would be introduced in accordance with its recommendations.
“As soon as the expert group reports at the end of June, the Government is absolutely committed to taking action in this area,” Ms Shortall added.
During the debate, Fine Gael TD for Mayo Michelle Mulherin said “fornication” was the single greatest cause of unwanted pregnancies in Ireland.  “In an ideal world there would be no unwanted pregnancies and no unwanted babies. But we are far from living in an ideal world,” she said. “Abortion as murder, therefore sin, which is the religious argument, is no more sinful, from a scriptural point of view, than all other sins we don’t legislate against, like greed, hate and fornication. The latter, being fornication, I would say, is probably the single most likely cause of unwanted pregnancies in this country.”
Labour Party deputies voted against the Bill despite expressing support for such a move at last week’s party conference. A spokeswoman said last night the issue of abortion was a sensitive one and should not be dealt with through a Private Members’ Bill.
At the party’s annual conference last weekend, Labour members supported a motion in favour of legislating to give effect to the X-case ruling. Labour has consistently called for such a move since the 1992 ruling.
“In the meantime women who need life-saving abortions, and their doctors, are in the same invidious legal position as they were 20 years ago,” he said. “Nor will the European Court of Human Rights be content to see Ireland’s legislators continue to drag their heels. Action is long overdue – and this Bill is a minimum first step.”

This entry was posted on Saturday, April 21st, 2012 at 8:12 pm and is filed under politics. You can follow any responses to this entry through the RSS 2.0 feed. Responses are currently closed