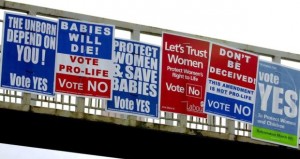 Opinion: A society that aspires to be humane must recognise the reality of human difficulties
The Protection of Life during Pregnancy Act (PLDP Act) was signed into law in July last year and became operative at the start of 2014. This law was 20 years in gestation, since the Supreme Court ruling in the X case in 1993, which allowed for lawful abortion when the mother’s life was at risk, including the risk to life from suicide. In two subsequent referendums the Irish people voted to support the Supreme Court decision that suicidality could be a legitimate reason for terminating a pregnancy.
The regulations and procedures about how the service will operate are laid out in the PLDP Act and statutory instrument. But a hitch has now come to light: guidelines for clinicians on the new legislation are still pending. This was brought to light in an Irish Times article by Kitty Holland on January 3rd. While there are some minor professional issues related to training that remain to be resolved, the real problem is how women will access the service. The College of Psychiatrists of Ireland had expressed “extreme concern” at the absence of guidance for GPs in finding suitable psychiatrists to assess a suicidal woman requesting an abortion.
Sexual violence
Let us imagine a hypothetical case. A woman, let us call her Kate, becomes pregnant following an act of sexual violence. She is distressed and inconsolable and cannot contemplate continuing with the pregnancy. She would rather die than continue with the pregnancy and forced motherhood. She is not depressed, but she is suicidal and the only remedy for her is the termination of the pregnancy.
Read full article: www.irishtimes.com

This entry was posted on Sunday, February 16th, 2014 at 8:22 pm and is filed under politics. You can follow any responses to this entry through the RSS 2.0 feed. Responses are currently closed